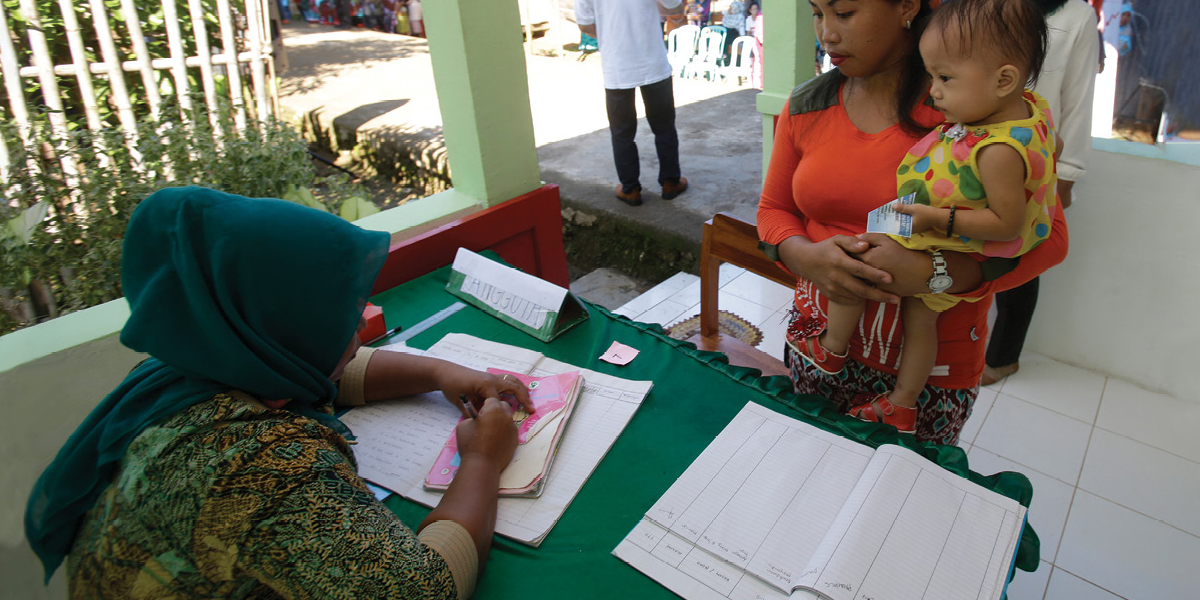 These findings build upon the interim evaluation report results published in 2018.

The project’s key long-term outcome was to improve health and nutritional status among pregnant women and children, as measured by rates of child stunting, wasting, underweight, and low birthweight. However, the project had no impact on these outcomes, even for the cohort with the most project exposure, although stunting declined in both treatment and control areas (see figure). These findings are consistent with the limited impacts on the sanitation- and nutrition-related outcomes described below, which were expected to drive changes in stunting. The project also showed no impact on stunting for subgroups and no evidence of a systematic pattern of impacts on any other outcome by subgroup.

Given the lack of impact of project interventions on key intermediate outcomes, it was not possible to determine which elements were the drivers of impact to answer the second evaluation question.

Because of the association between undernutrition and intestinal infections, the Nutrition Project sought to improve sanitation behaviors by mobilizing communities to address open defecation (through inter- active community gatherings known as “triggering”) and become open-defecation free (ODF).

The project had a positive impact on the percentage of villages that were triggered. On average, sanitarians in treatment areas reported that about 74 percent of villages that they oversee had been triggered, a statistically significant 16 percentage points higher than in control areas (see figure). However, the proportion of villages that had been verified as ODF was low in treatment areas—about 2 in 10—and similar to control areas. Consistent with the lack of impact on ODF, the project had no impact on the types of sanitation facilities reported by households, their sanitation-related behaviors, or the incidence of child diarrhea or worm infections.

The Nutrition Project sought to achieve its key long- term outcome by improving a broad range of health outcomes during pregnancy and in the first two years of life. However, the project had limited effects on maternal and child service utilization and access, as intended by the community-driven development component, Generasi. It had no impact on receipt of one-on-one counselling during prenatal or postnatal checkups, or on the percentage of deliveries assisted with a skilled provider. The project affected the likelihood of women attending nutritional counseling sessions (by eight percentage points for pregnant women and seven percentage points for caregivers of young children), but overall attendance at nutritional counseling sessions remained low.

The evaluation also examined project impacts on all key outcomes by subgroups, including those defined by socioeconomic status, caregivers’ education, children’s gender, and service availability, as well as by province and cohort. Although there were substantive differences in impacts among certain subgroups for certain outcomes, the analysis did not identify any patterns that suggested that impacts were systematically different for particular subgroups.

Mathematica conducted an impact evaluation of the Nutrition Project using a randomized controlled trial in the three newly added provinces of the 11 in which the project was implemented. The final evaluation relies on quantitative endline data collected by SurveyMETER approximately one year after the end of the project. It reflects an exposure to treatment of up to three years that varied by community and intervention. Impacts are regression-adjusted differences between treatment and control.