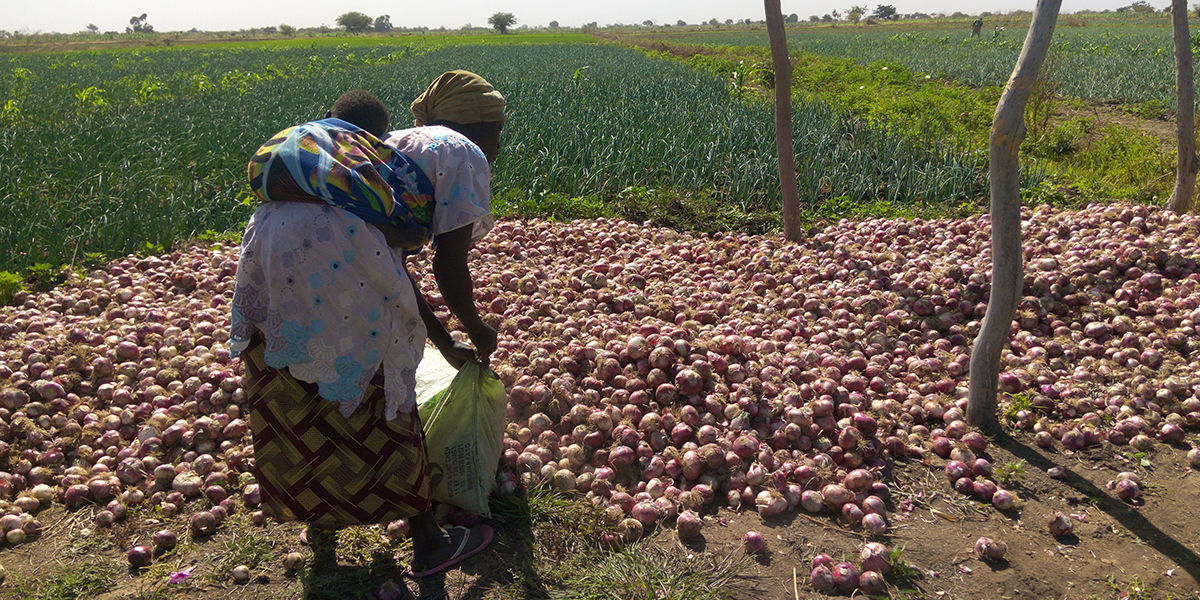 MCC’s $480 million Burkina Faso Compact (2009-2014) included the $142 million Agricultural Development Project (ADP) to support increased agriculture production, incomes, and land tenure. The ADP financed the construction of a 2,246 hectare irrigated perimeter in the Di Department, supported improved water resource management, and provided farmers with training, irrigable land, and land titles. The activities were based on the theory that reliable access to irrigation, productive land, and secure land use rights would allow farmers to farm year-round, diversify into higher-value crops, and obtain higher profits and incomes.

This final impact evaluation was designed to understand:

When farmers were given reliable access to irrigation, the cultivated area of the perimeter doubled in the dry and rainy seasons. Cultivation shifted to higher-value cash crops and staples (onions, tomatoes, maize, and rice) rather than traditional crops such as millet, sorghum, beans, and peanuts. Production and yields rose, but profit per hectare increases were lower than anticipated across all types of beneficiaries and for all focus crops (maize, rice, tomatoes, onions).

Beneficiaries of the project were split into two groups. The first were the original owners of land in Di Department who received smaller, but irrigated plots as compensation for their lost land due to the irrigation infrastructure. The remaining land on the perimeter was distributed to a) women, youth, and other farmers from the area, and b) applicants through a lottery.

The original owners are better off than before the construction of the perimeter: three-quarters reported earning higher agricultural profits than before perimeter construction, and nine out of ten reported higher food security. Lottery Beneficiaries made 75% higher agricultural profits leading to 50% higher household incomes relative to those who did not win a plot.

Farmers feel secure about their tenure on the perimeter: about three-quarters report possessing formal land documents, and about 85 percent believe that it is very unlikely that they would lose access to their land within the next five years. Very few farmers reported any land conflicts. Not all households are fully aware of their rights to transfer land. Most understand their right to bequeath or rent out their land—and about seven percent did so in 2019. About one-quarter know that they have the right to sell their land or leasehold. Women and youth who received small garden plots on the Di perimeter—of about 1/20th of a hectare—rate their land tenure security as high, similar to other groups who received land.

Compared to farmers who did not win the Di lottery, lottery winners are twice as likely to have made investments in their land, and are also more likely to rent land, apply for a loan, and use land as collateral.

Sustaining the benefits of access to irrigation over decades relies on functioning infrastructure which requires institutions capable of, and with sufficient financial resources for, operations and maintenance. The project set up and supported water user associations (WUAs) with beneficiaries paying water user fees.

Six years after the end of construction, pumping stations are in good condition and canals have some damage but are highly functional. However, drains and valves have significant damage, which has exacerbated flooding on parts of the perimeter. Access routes are somewhat damaged but mostly still functional.

The WUAs implement adequate routine maintenance for the pumping stations. To achieve cost-savings, WUAs hired shared staff members and created an inventory of repair parts that has been effective in addressing and preventing some emergency breakdowns. However, most areas along the perimeter struggle to maintain and repair infrastructure due to low farmer participation and lack of appropriate tools. WUAs also struggle with cash flow due to late fee payments in most sectors. Financial sustainability is threatened by low long-term fee recovery rates in sectors with high proportions of rice plots, high electricity costs, and low farmer participation in communal work, as well as leaky canals.

At current levels of maintenance, stakeholders estimated the overall remaining lifespan of earthen infrastructure (such as drains and small canals) at 10 years, and 10-30 years for pumping stations and concrete components (bigger canals). Based on the original estimate of a total lifespan of 25 years, the remaining lifespan would be 18 years. Estimates of infrastructure longevity have decreased since the interim evaluation and vary by sector.

MCC considers a 10 percent economic rate of return (ERR) as the threshold to proceed with an investment.

The primary reason for the lower than expected ERR is that the area cultivated in onions—the most profitable crop—was lower than in the original model; and the profits for onions and especially tomatoes were lower than anticipated. Given the cost of the construction was approximately $45,000 per hectare, even with high benefits to beneficiaries, the profits per hectare needed to be substantially higher to meet the original ERR target.

The evaluation comprises three components: (1) a performance evaluation of outcomes of beneficiaries of land on the Di perimeter that informs an economic assessment of MCC’s investments into the Di perimeter, (2) an impact evaluation of the Di lottery, and (3) an investigation into the current functioning of the perimeter, maintenance activities, and the perimeter lifespan. The evaluation reflects findings 5 years after the completion of project activities. Remote sensing techniques complemented the descriptive analysis to better describe cultivation patterns.