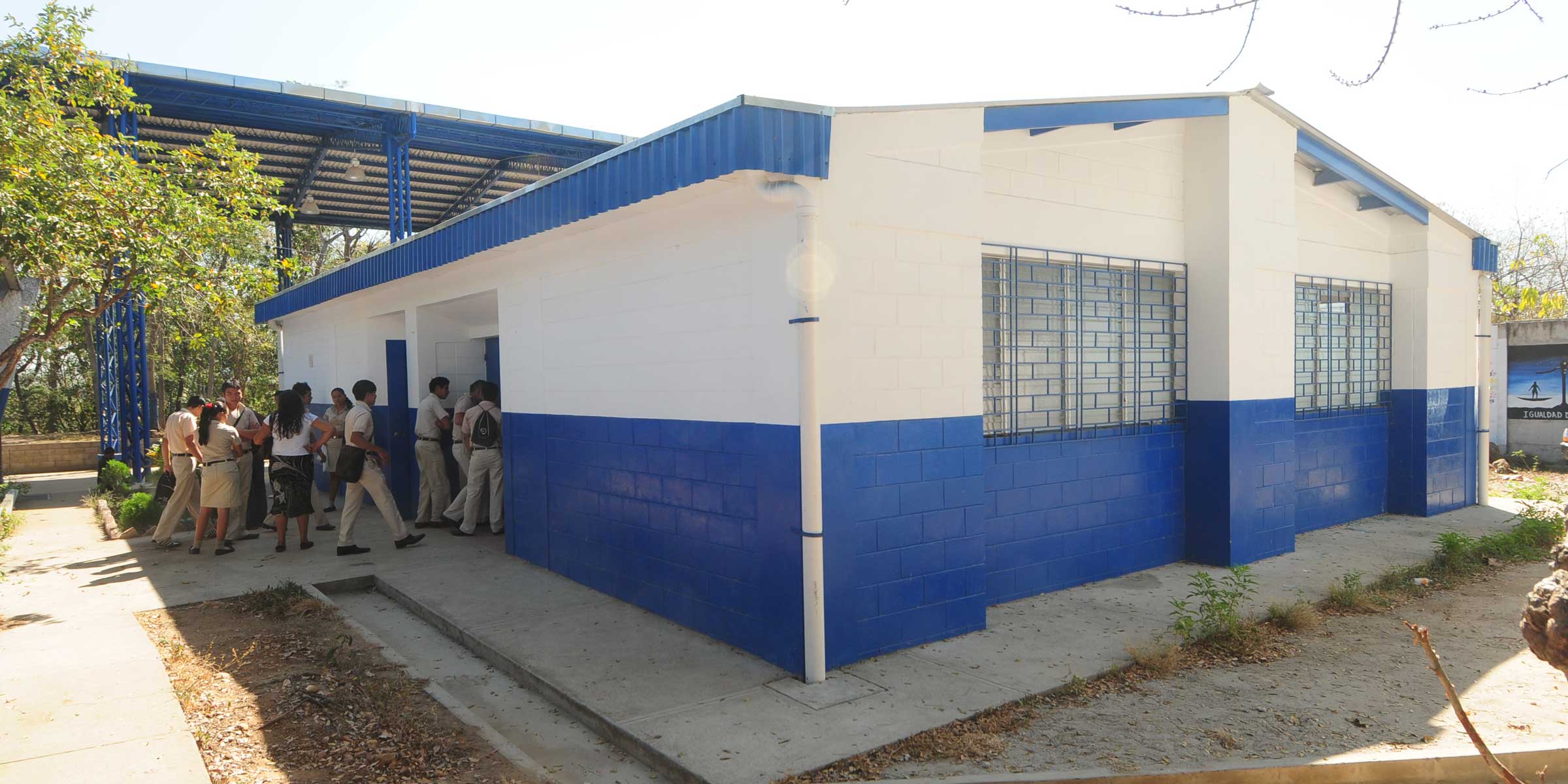 MCC’s $449.5 million El Salvador Compact (2007-2012) aimed to improve formal technical education through the Formal Technical Education Sub-Activity, which included the Strengthening Technical Secondary Schools intervention ($9 million) and the Chalatenango Technical Institute (ITCHA) Post-secondary School intervention ($7 million). All efforts were based on the theory that providing scholarships and strengthening schools (with infrastructure improvements in classrooms, laboratories, and sanitation services; new degree and certificate programs; teacher training; and student assessment) would reduce barriers for students to enroll in participating schools and improve the quality of education.

The evaluations of the Formal Technical Education Sub-Activity were customized for each component. The secondary scholarship program was designed to work in conjunction with secondary school strengthening investments in 20 pre-selected secondary schools and had a shared target population and objectives, whereas the ITCHA program related to a different set of interventions and a different student population. Spanning these various components, the evaluation addressed a common set of research questions, including:

Overall, the interventions played no detectable role in motivating or allowing students to progress in or graduate from secondary schools. However, these investments did produce improved academic achievement, with students at strengthened schools achieving significantly higher PAES Skills and Learning Assessment global and science test scores than students at comparison schools. Interviewed stakeholders related positive test scores to factors such as better laboratories, more practice, and the technical degree and diploma programs introduced as part of the intervention. Moreover, it is important to note that in spite of females achieving lower academic achievement in comparison schools, there was no difference between females’ and males’ academic achievement in the strengthened schools.

Labor market outcomes were measured by employment, income, and continuation in post-secondary education. School-strengthening efforts had no impact on employment or income one year after the secondary students graduated. This was due in part to increased enrollment in post-secondary education, which could pay dividends in future years if students obtain more specialized, higher-paying jobs as a result of their advanced studies. Although the intervention had no perceptible impact on employment indicators for females or males, males’ employment rates were almost double females’ employment rates in both treatment and control groups. Stakeholders perceived that this finding reflected persistent cultural values and gender stereotypes in El Salvador: in general, males are expected to find employment and females are expected to remain at home—even after completing secondary school.

Scholarships had a positive impact on students’ enrollment, grade completion, and grade progression in secondary school. These findings validate the fundamental logic of the scholarship program; namely, that modest scholarships can incentivize needy students to enroll in and complete technical degree programs. Males who were offered scholarships were between 14 and 20 percentage points more likely to enroll in and complete secondary school than males not offered scholarships, whereas scholarship offers resulted in no statistically significant impacts on female enrollment. Several stakeholders noted that scholarships serve as a stronger motivator for males than females because they reduce males’ strong incentives to emigrate or find low-skilled work to provide for their families. Scholarships had a negative effect on students’ employment, but a positive effect on their enrollment in post-secondary technical education—motivating students to forego immediate entry into the labor force in favor of pursuing a technical post-secondary degree.

Three-fourths of the students credited the ITCHA scholarships for their enrollment at ITCHA. ITCHA students had good academic achievement and had healthy graduation rates. On average, ITCHA students reported grade point averages of around 8.0 out of 10 during their two years at ITCHA. Graduation rates for both ITCHA cohorts were 85 percent and above, surpassing the compact target.

Challenges at the strengthened ITCHA included dealing with crowded classrooms, resolving discrepancies in academic standards, and assuring students about the new programs’ legitimacy. Teachers noted improvements in the quality of education, but would have liked more guidance, less redundancy in modules, and more realistic goals for the competencies students were expected to demonstrate at the end of teaching modules.

Employment rates one year after ITCHA graduation were below 65 percent, which failed to meet the compact target of 70 percent. This was partially due to students’ further education, but also likely due to low labor market demand in the region. Seven percent of all interviewed ITCHA students across both cohorts reported not working at follow-up because they were engaged in university studies. Some academic cohorts, such as alternative tourism, faced more difficult labor markets than others, such as civil engineering.

Despite no meaningful differences in grade point averages or graduation rates across all degree programs, gender imbalances were found between males and females in terms of employment and income. Females in both ITCHA cohorts reported employment rates 13 to 16 percentage points less and $55 less in monthly earnings, on average, than employed males during the final evaluation. ITCHA staff cited discrimination and gender norms as a factor in these imbalances.

The Formal Technical Education Sub-Activity consisted of three separate evaluations, the results of which were separated out into three components: (1) Strengthening of 20 Technical Secondary Schools, (2) Scholarships for Technical Secondary Schools, and (3) Strengthening of the Chalatenango Technical Institute. The evaluations used multiple methodologies in order to answer different research questions. The target population was the same for the strengthened secondary schools and scholarships.

The impact evaluation of the strengthening of the 20 Technical Secondary Schools assessed whether the intervention improved educational and labor market outcomes for students attending schools affected by the intervention using a matched comparison group. Baseline administrative data were collected from 2006-2008, and the baseline survey was conducted in 2009. Final administrative data were collected in 2012, and the final survey round was conducted in 2013.

Scholarships were provided through random assignment for the 2010 school year and data collection using student-level questionnaires were collected in three rounds (July and August 2011, July and August 2012, and October 2013).

The mixed methods performance evaluation, with data collected 2011-2015, looked at ITCHA’s transformation, the role of key players involved in the process, the barriers and facilitators to transforming the institute, and students’ educational and labor market outcomes with regards to enrollment, graduation, and employment to the extent possible.