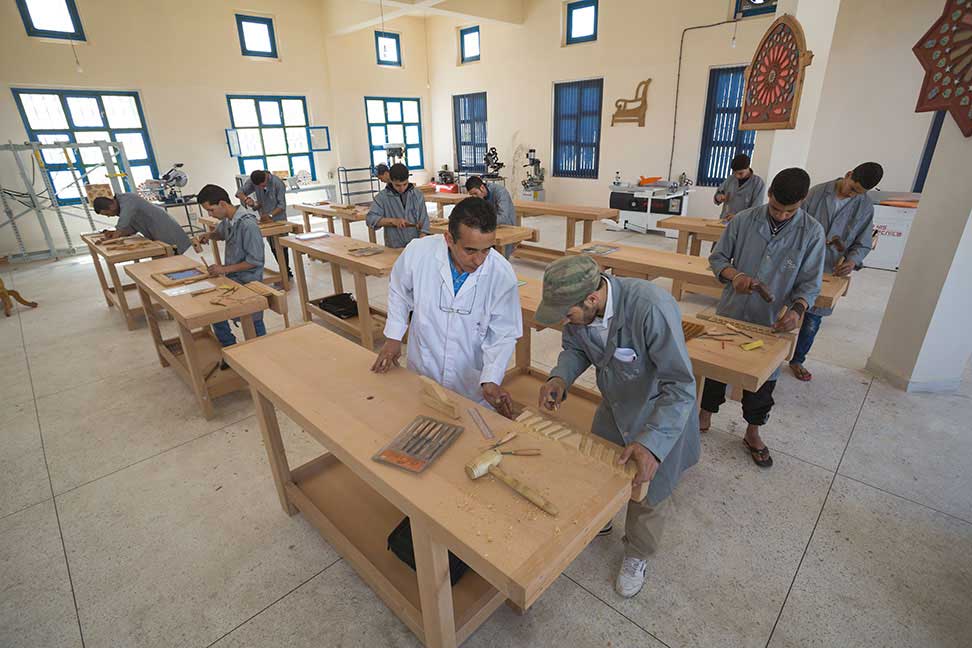 Modernizing the Artisan and Tourism Sectors in Morocco

The final performance evaluation was designed to understand whether the training and support for equipment upgrades, marketing and promotion activities, and rehabilitation of work and historic sites:

An additional and important question for this project was:

By the program end date, the construction was completed for Ain Nokbi foudouk – a new site for copperware artisans who previously operated in Lalla Yeddouna square. 60 percent of the project-affected persons declared that the Resettlement Action Plan had a positive impact on their social and economic situation. However, due to lack of completion of other reconstruction activities, Morocco had to return more than 40 million dollars to MCC due to lack of completion at program end. As of September 2013, Morocco committed to complete the rehabilitation work.

Potters reported the training sessions allowed them to get to know the associations, a collective of artisans. This in turn meant associations could bring in new members. The gas kilns promoted by the project had many advantages over traditional kilns – such as firing quality, easy usage, reduced pollution, and safety – which are important for high-end products, such as cooking pottery. However, these products account for a small percentage of the potters’ overall production and sales which may explain why so few potters purchased the kilns despite the large subsidy.

30 percent of potters reported employing new marketing practices after attending trainings. 19 percent of artisans who participated in marketing and international trade fairs received new orders. However, many reported production difficulties with meeting new orders, which supported the project's provision of training on better practices and subsidies for equipment upgrades. Lastly, due to major tourism declines in the wake of a global financial crisis, lack of a viable comparison group, and incomplete construction, tourism was not directly measured by the evaluation.

Artisans who participated in training, as well as promotion and marketing activities, self-reported a range of increases in sales from insignificant to substantial. Regarding sustainability: (i) for potters, sustainability was considered poor and it was recommended the government continue to pursue activities to help potters apply the training provided; (ii) for replacing traditional kilns with gas kilns, the creation of collectives to share the kilns (and kiln costs) was considered necessary; (iii) for the tourism circuits, a dedicated budget was considered necessary to keep the activity going; (iv) for promotional campaigns, the sustainability was considered relatively good as long as Maison de l’Artisan stayed involved.

Artisans targeted by the project began receiving training and support in May 2010. However, some activities, such as the National Label and historic site rehabilitation, were not complete by program end date, resulting in an exposure period between 0-42 months.

The performance evaluation of the Artisan and Fez Medina activities used an ex-post methodology relying on data collected from April – November 2013, which included: