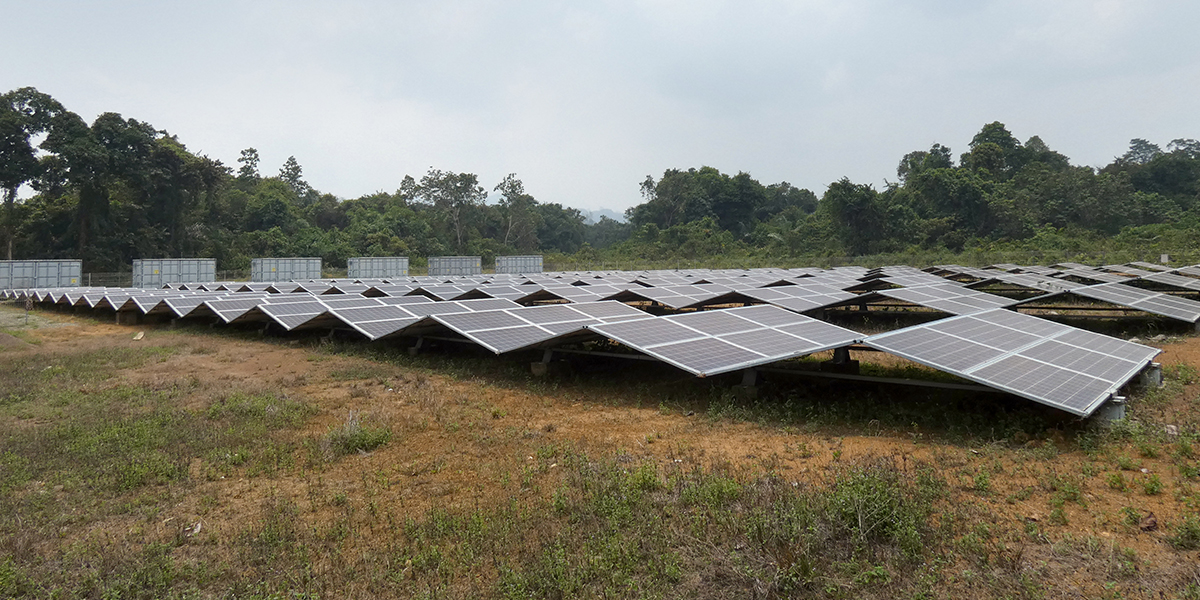 MCC’s $474 million Indonesia Compact (2013-2018) included the $288 million Green Prosperity (GP) Project that aimed to increase economic productivity and reduce land-based greenhouse gas emissions. The project funded 26 community-based off-grid (CBOG) renewable energy (RE) grants totaling $85.3 million. Some were designed as community-owned RE projects, while others were RE components of natural resource management projects. These grants sought to substitute renewable energy for fossil fuels in remote and rural communities, opening opportunities for social and economic improvements through access to electricity.

Domestic Use of Electricity

Economic Use of Electricity

Barriers to Financial and Operational Sustainability

The interim impact and performance evaluation of the off-grid renewable energy grant portfolio focuses on six grants. A quantitative analysis of two grants answers Questions 1-4 that will be revisited during the final evaluation. Case studies of four grants answer Questions 5-7.

Domestic Use of Electricity

Most of the grants targeted domestic uses of electricity in the short term, with economic uses expected in the long-term, if at all. Such domestic uses included lighting, studying, and powering of appliances and public facilities. These uses were prominent for the Akuo Energy, Anekatek, and Hivos grants. For Anekatek, the mini-grids provided nearly 12 hours per day of additional electricity access and increased the likelihood that domestic appliances would be used. Domestic appliance use was reported to alleviate the burden of domestic tasks typically assigned to women, such as cooking and retrieving water.

In 2017, 89% of Akuo Energy treatment households in Berau and 21% of Anekatek treatment households in Sumba used at least one non-renewable source of energy, while in 2019, only 1% and 3% did so. Reduction in diesel consumption is especially notable—by 1.6 liters per household per month due to the Anekatek grant, and by as much as 7.0 liters per household per month due to Akuo Energy grants. Households that used kerosene for night-time lighting can now use the light provided by mini-grid electricity or Hivos solar lamps. Village-level diesel generators used before the commissioning of Akuo Energy mini-grids are no longer used. Even in Sumber Agung, where the intended economic uses of solar energy have not materialized, the solar power plant is used in place of diesel generators to power village public facilities.

Economic Use of Electricity

Significant economic benefits pursued by the Anekatek, Akuo Energy, and IBEKA grants were not expected to have materialized at the time of the evaluation (1.5 years after introduction of the mini-grids), and indeed economic benefits appear minimal. There was some evidence of increased time spent on productive activity and of the sale of refrigerated goods, but little evidence of increased income or of new businesses using the source of electricity to power value-adding appliances.

Barriers to Financial and Operational Sustainability

For most of the grants, arrangements to fund operations and maintenance may not be enough to cover a large expense, because electricity tariffs are set below the cost of production and demand is low. The PEKA grant in Berau saw most of its assets fail in 2018 for lack of maintenance. The IBEKA and Javlec grants contend with unclear legal ownership and insufficient revenue. After the grantee subsidy expires in March 2020, operations and maintenance funding for the Akuo Energy mini-grids will be insufficient, and continued sustaining the Anekatek mini-grids will require external subsidy, barring increased demand. The Hivos grant, however, created a renewable energy service company, perhaps ensuring the assets’ longevity.

MCC considers a 10% economic rate of return (ERR) as the threshold to proceed with investment. While the evaluator did not recalculate the ERRs, they provided feedback on the validity of the ERRs produced by MCA (19.45% to 26.45%) in light of the evaluation findings. Four of the six grants had known ERRs: Akuo Energy, Anekatek, W2 PEKA, and W2 Javlic grants. Although the evaluation did not recalculate the ERRs, it did assess the plausibility of the underlying assumptions. The evaluation found that benefits will probably be lower than hypothesized for all four grants, although actual ERRs for three of the four could still exceed 10% if the infrastructure reaches its intended 20-year operating lifespan. W2 PEKA is the exception to this finding.

For the Akuo Energy and Anekatek grants, the consumer surplus benefit arising from increased domestic use will contribute to somewhat higher ERRs, but energy expenditure has not declined as envisioned, and the economic uses of the mini-grids have not materialized. For the W2 Javlec grant, many intended benefits have accrued to a few wholesale traders rather than to hundreds of fisher-persons as intended, but all parties stand to benefit from the reported increased preservation of fish. For the W2 PEKA grant in Berau, the grant-funded infrastructure has mostly fallen into disuse.

The interim evaluation included an impact evaluation of the Anekatek grant in East Sumba, a pre-post performance evaluation of the Akuo Energy grant in Berau, and qualitative case studies of 4 other grants. Respondents were exposed to the program intervention for between 12 and 18 months, depending on the grant.

A final study covering the distal outcomes and sustainability prospects of the Anekatek and Akuo Energy Solar mini-grid schemes in East Sumba and Berau is expected to be available in 2022.