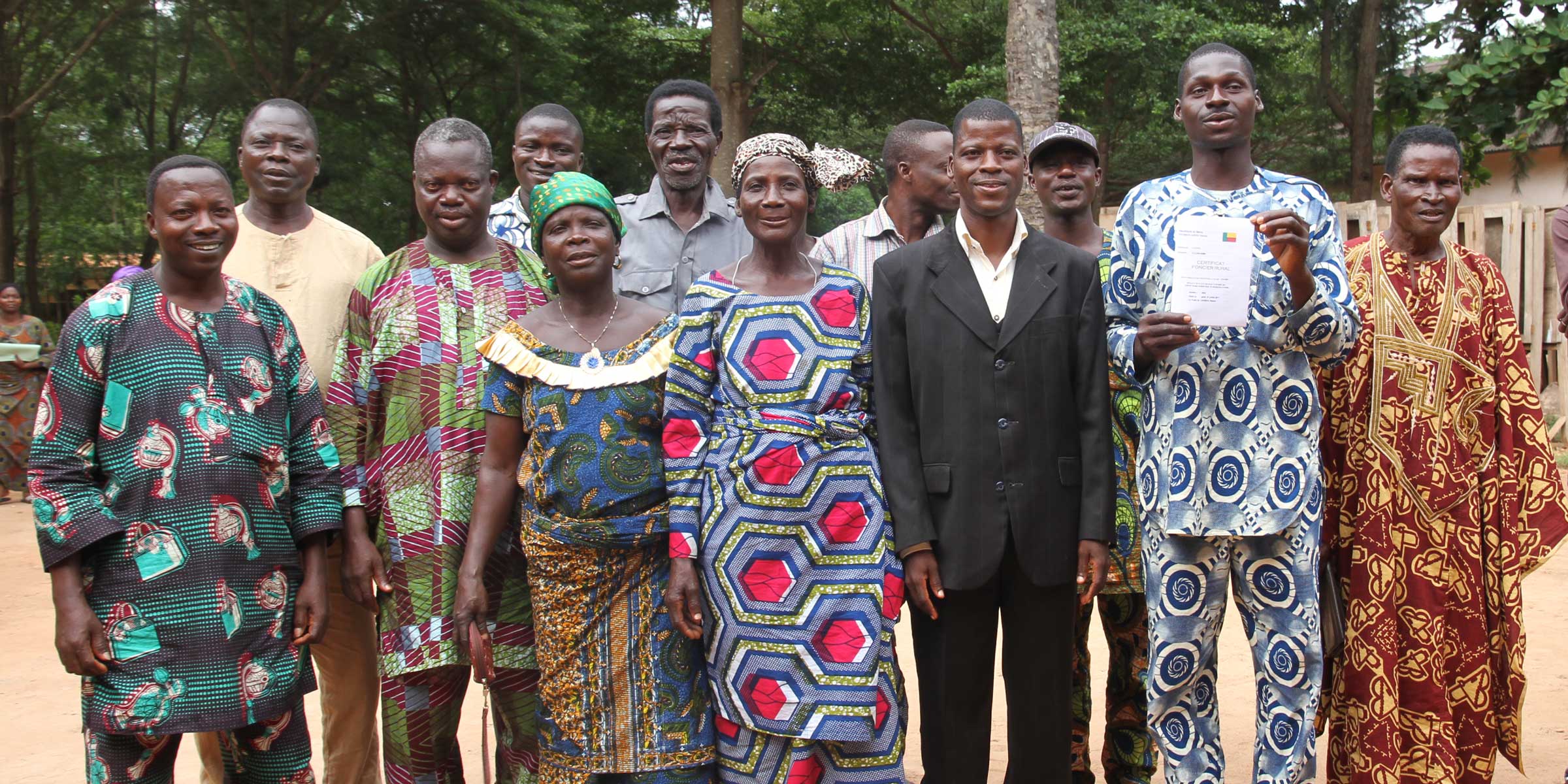 The impact evaluation was designed to answer the following questions:

In 2011, households in treatment villages reported having clear land parcel boundaries at a rate of 27 percentage points (pp) higher than control parcels, representing around a five-fold increase relative to the control mean of 6 percent. Though smaller, the effect remained visible in 2015, with 21 pp higher proportion of treatment parcels having clear boundaries compared to control parcels. The increase in parcels with clear boundaries is likely thanks to increased demarcation, which involves mapping parcel boundaries and placing physical markers along those boundaries. In 2015, parcels held by residents of treated villages were 23 pp more likely to be demarcated, with a 30 percent average rate of demarcation reported in treatment villages compared to 7 percent in control villages.

At the same time, in 2015, tenure security was also 3 pp more likely to be enforced through documentary evidence of land rights, representing a 23 percent increase from control villages of 13 percent. This effect was mostly driven by the issuance of land use certificates, which increased by 6 pp compared to controls of 0.4 percent. Despite increased clarity of parcel boundaries via land demarcation and land use certificates, there was no effect on perception of land tenure as measured by fear of loss of land nor any effect on incidence of conflicts in 2011 or 2015. There was no statistically significant difference between parcels managed by female- and male-headed households.

In 2011, the evaluation found evidence that land demarcation activities prompted a change in farmers’ agricultural investments. Farmers shifted land cultivation activities toward long-term crop investment, including tree- and perennial-planting. Treated parcels were 2.4 pp more likely than control parcels to be used primarily for perennial crops, and were 1.7 pp more likely to have a newly-planted tree—almost 50 percent more than the control average of 4 percent. The evaluation found no evidence of continued investment in tree planting during the final evaluation in 2015. However, the proportion of parcels used primarily for perennial crops continued to increase, from 2.4 pp in 2011 to 3.2 pp in 2015—indicating that significantly more (nearly 50 percent more) treatment parcels were planting perennials compared to controls of 7.5 percent. In 2015, both female- and male-headed households continued their increased investment in perennial planting, though the increased investment in tree-planting was only observed in female-headed households.

In 2011, the evaluation found no evidence that the land demarcation activities prompted a change in the decision to cultivate land or leave it fallow. Leaving land fallow is an important soil fertility investment; however, uncultivated land with lack of documented land rights risks being taken by others. These risks are typically higher among women. It is noteworthy that, when data is disaggregated based on male versus female impacts, women-headed treatment households were far more likely than control households to fallow land in 2011, likely due to increased perception of security in their land rights. Although, the proportion of parcels left fallow decreased by 0.5 pp compared to a control average of 1.4 percent in 2015, this decrease was driven by a reduction in fallowing among men; there were not significant differences in fallowing between control and treatment parcels of women-headed households. This could be due to the fact that land is typically only fallowed for one year.

Despite the increase in long-term agricultural investment observed in 2011, the evaluation did not find evidence that output and farm yields uniformly increased in either 2011 or in 2015. However, in 2015, the evaluation found evidence that households in treatment villages increased their demand for non-household member farm labor to support their agricultural production. Additionally, although the gender gap in land fallowing was improved, the gender gap in agricultural revenue and yields worsened. It is unclear what drove this effect, as cultivation, farm labor, and agricultural inputs were similar in 2015. The World Bank plans to conduct additional research on crop cultivation over time via geospatial imagery and remote sensing in the future.

In 2011, following the land demarcation activities, there is evidence that household members in the treatment villages were less likely to work as paid workers (for off-farm and on-farm activities) and more likely to work in off-farm self-employment. In 2015, the evaluation found no evidence that being in treatment villages impacted household members’ decision to work as a paid worker or as self-employed in off-farm income-generating activities.

The evaluation employs a Randomized Control Trial (RCT) methodology, taking advantage of a unique feature of program rollout. All treatment villages were selected through district-level public lotteries that provided a public and transparent identification of treatment and control villages. The experimental sample covers 291 villages: 193 treated and 98 control. The geographic coverage of the survey spans the entire range of Benin’s agro-climatic zones, with data from nine of Benin’s twelve regions (départements).

The evaluation used five sources of data to analyze the impact of the PFR in Benin:

The first round of quantitative data collection was administered in March/April 2011, providing interim data on the impacts of mapping and demarcation of parcels within villages and the establishment of PFRs. This captures a one year exposure period for effects of demarcation (283 of the 300 treatment villages had finished demarcation activities by the 2011 survey). It does not capture effects of issuance of CFRs and related functionality of the village and commune land offices. Overall 3,507 households were interviewed (12 per village), with detailed information on 6,572 parcels used by these households.

The same sample of households was re-surveyed during the second and final data collection round in April/May 2015, which aimed at estimating the longer-term impacts of land demarcation in addition to the short-term effects of any land certification from the establishment and strengthening of village and commune land office and related public outreach. The panel dataset includes 3,276 households (6 percent attrition). It captured a five-year exposure period after demarcation with 97 percent of villages having completed PFRs and a 1-3 year exposure period after institutional strengthening and related issuance of land certificates. By the 2015 data collection, only 19 percent of the demarcated parcels had obtained a CFR with only six treated villages in the study sample having achieved full CFR delivery for demarcated parcels.