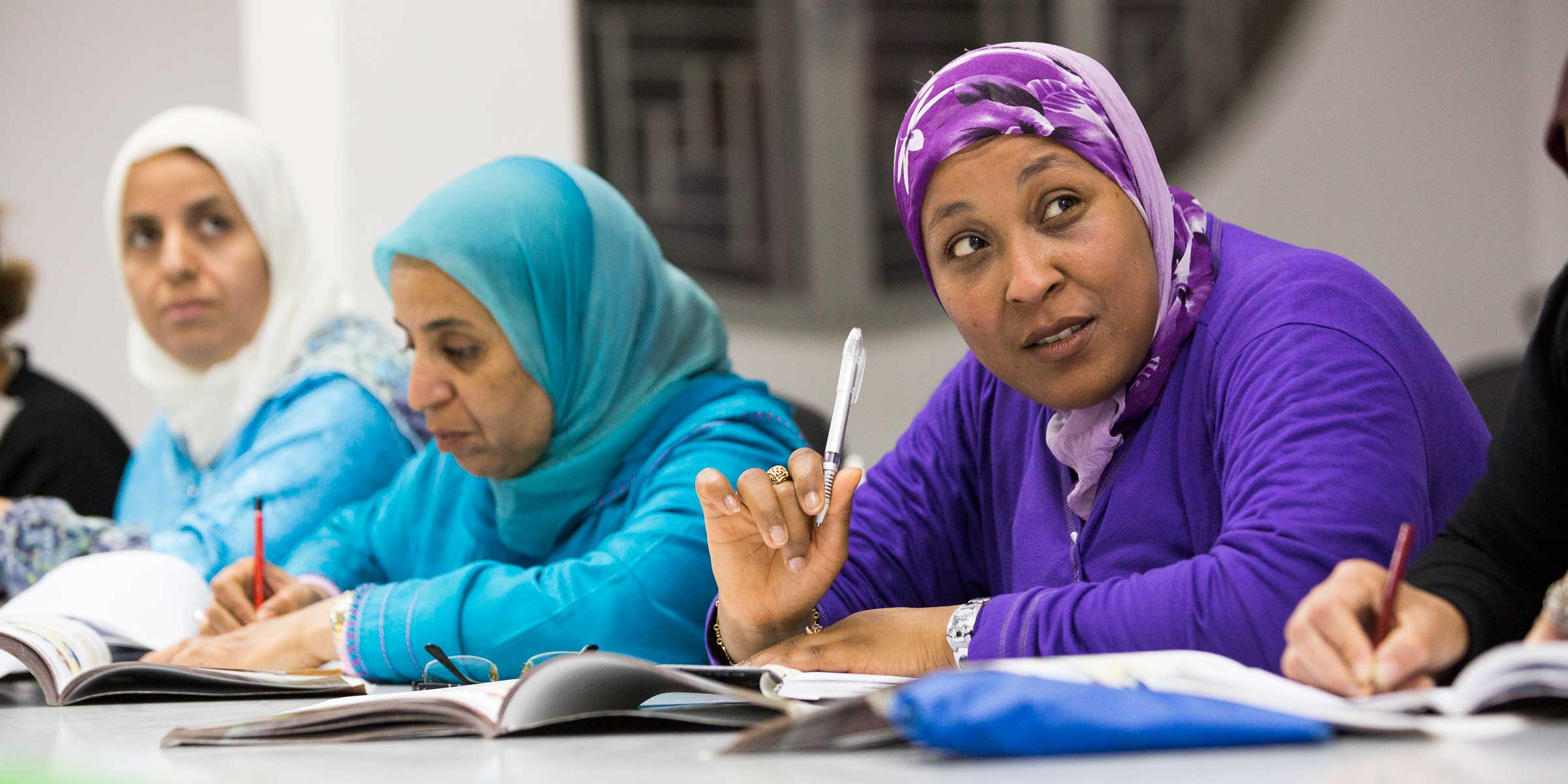 MCC’s $650 million Morocco Compact (2008-2013) funded the $32.8 million Functional Literacy and Vocational Training (FLVT) Activity, which aimed to provide literacy and vocational training programs to improve the productivity and employability of trainees. This program was based on the theory that improved skills and professional qualifications would increase the revenues of artisans, fishers, and farmers participating in the program.

Program to Expand Access to Qualifications and Competencies (PEAQC)

This final ex-post performance evaluation was designed to answer the following questions:

As part of the activity’s efforts across the handicrafts, agriculture, and fisheries value chains, 130 ministry classrooms were equipped with furniture and computers, 82 NGOs (14 fisheries, 15 agriculture, and 53 artisan) were contracted to deliver functional literacy programs, and 1,856 literacy trainers and supervisors were trained across 81 workshops. In all, 69,000 beneficiaries participated in the two-stage functional literacy program (80 percent completed the training, surpassing the target of 75 percent). Female participation in the literacy program was quite high: 67 percent of beneficiaries were female, substantially exceeding the initial target of 42 percent.

The literacy programs resulted in positive results for the participants: When surveyed, over 50 percent of beneficiary respondents reported increased income after training, and 76 percent of employers expressed satisfaction with the graduates they hired.

The Agence Nationale pour la lutte Contre l’ Analphabétisme (ANCLA) was created during the life of the Compact, became an independent agency in 2013, and is now in a position to deliver functional literacy programs with greater authority and cross-ministry responsibilities.

In addition to the training and apprenticeship programs implemented, the vocational training component of the FLVT Activity successfully resulted in 16 vocational training centers supported with training and equipment; 6,472 tools and machines delivered, verified, and installed with training on their use; 23 apprenticeship centers supported in spite of not being included in the program’s initial targets; and 197 trainers and 98 administrative managers trained in 91 training seminars.

A continuing education program implemented four-day workshops, applying a competency-based approach, with the goal of improved safety, productivity, technical skills, and/or marketing skills. 31 workshops for training center staff were conducted, and 15,038 artisans (105.5 percent of those targeted) received continuing training, including 3,792 women (106.5 percent of those targeted).

Based on survey responses, the trainings positively impacted beneficiaries: 59 percent of surveyed vocational training participants reported being promoted after training, and 92 percent of surveyed trainees reported that training was both relevant to their needs and that they would recommend the training to others. Employer responses suggest similar positive project results regarding graduate employability as 63 percent of employers surveyed said that graduates possessed the skills they needed.

Less positive results were found when focused on female participation: Across three of the five vocational training activities, participation rates for females were very low. Women made up only 12 percent of the residential or apprenticeship participants, and their participation was limited to the weaving/embroidery or pottery/ceramics trades. Moreover, women experienced a 46 percent dropout rate.

Government funding was, at least in some of the participating government agencies, severely curtailed after the end of the Compact, limiting the scope and scale of activities after the conclusion of MCC funding.

Program to Expand Access to Qualifications and Competencies (PEAQC)

23 PEAQC grants (between $50,000 and $200,000) to NGOs allowed 10,720 individuals in the handicrafts, agriculture, and fisheries sectors to receive literacy and vocational training (141 percent of target). 21 of those grants were independently assessed as having achieved success or relative success. 9,010 PEAQC beneficiaries received certificates of completion (119 percent of target), which are expected to serve as an important signal to potential future employers.

IMC Worldwide employed a mix of quantitative and qualitative methods to evaluate the performance of the Functional Literacy and Vocational Training Activity. Specifically, four data collection techniques were used:

In October and November 2016, approximately three years after program completion, surveys were implemented at 39 training institutions (16 Vocational Training Centers and 23 Apprentice Training Centers), and 35 NGOs/government training sites provided functional literacy training for artisans and for agriculture and fisheries through ministries.

Qualitative data was collected through interviews with staff from national and regional offices of the Ministry of Artisans, the Ministry of Agriculture and Maritime Fisheries, and the Directorate for the Fight Against Illiteracy. The visits to two PEAQC sites and the three case studies conducted as part of this evaluation required a broad selection of stakeholders and beneficiaries to provide input to the evaluators. However, the rigor of the evaluation was limited by the lack of a true baseline, a sample of beneficiaries which was not broadly representative, and a shortage of reliable data available at participating training centers.