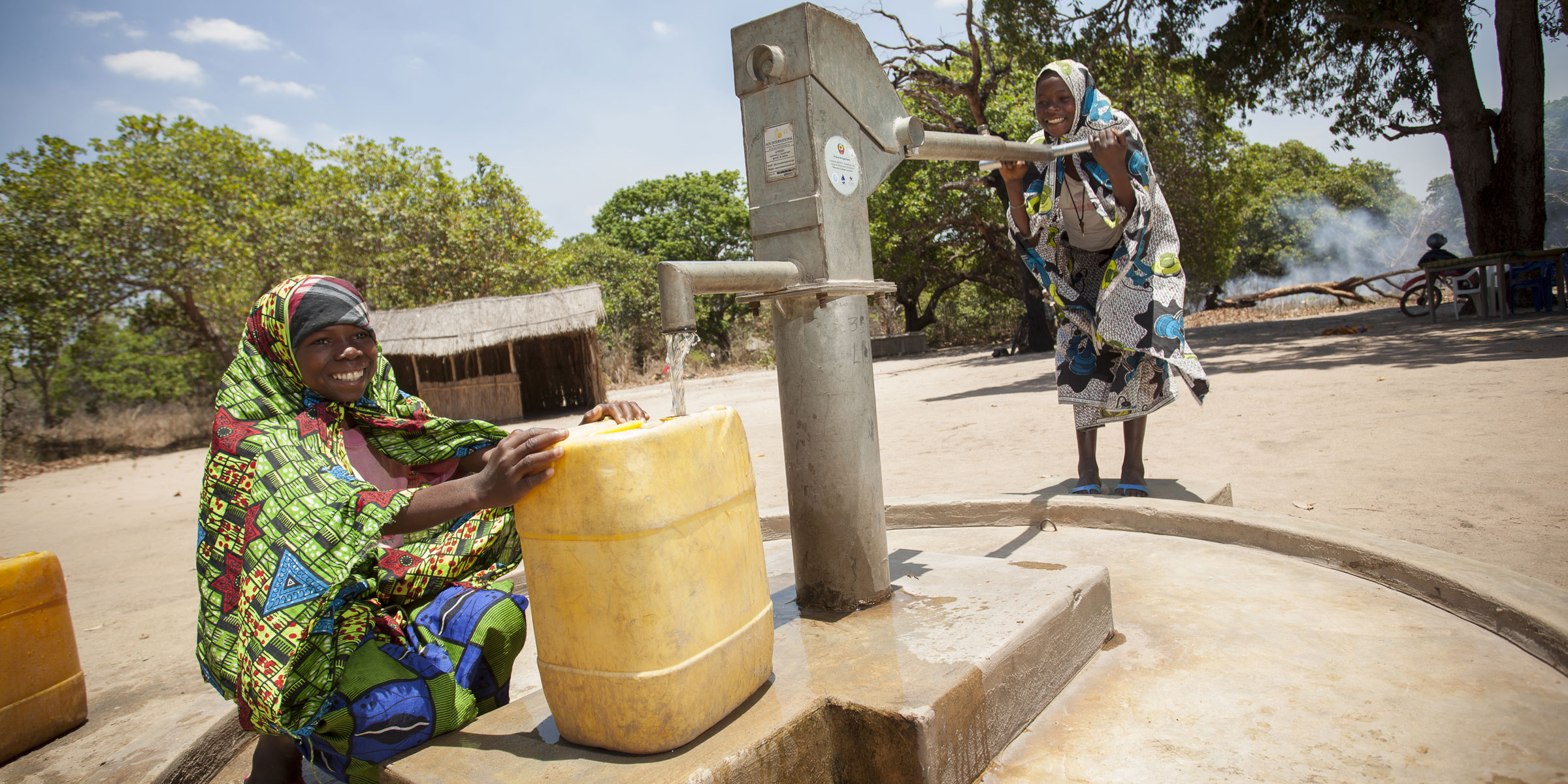 MCC’s $506.9 million Mozambique Compact (2008-2013) funded the $200.2 million Water Supply and Sanitation Project which included the $12.9 million Rural Water Supply Activity to increase access to safer water and improved sanitation in rural communities. This activity was based on the theory that constructing 615 boreholes with hand pumps, mobilizing water committees to maintain the infrastructure, and training 8,400 individuals on hygiene and sanitation practices would decrease waterborne illnesses and reduce the time spent collecting water and caring for the sick, leading to more time spent on productive activities.

This final impact evaluation was designed to answer whether or not installing boreholes with hand pumps and conducting hygiene and sanitation training:

The installed hand pumps provided treatment communities with safer water: water quality testing at the hand pump showed contamination at low risk levels, while 39 percent of traditional wells and 71 percent of surface sources showed high levels of contamination. Households in project communities substituted unsafe for safe water with median water consumption per capita from safe sources increasing 16.7 liters per day when compared to comparison communities. Despite the improved access to safer water, households living in project communities continued to use unsafe sources: 20.6 percent used water from unprotected wells and 8.7 percent from rivers/lakes. For those households that did not use the handpump, the most frequently cited reason was distance, followed by the cost of water. Once households were more than 1.2 km from the handpump, the likelihood of them using the handpump decreased below 50 percent. Additionally, for every 100 m increase in the distance from a household to its nearest handpump, the volume of improved water collected dropped by 1 LPCD.

Women and youth were primarily responsible for water collection in these communities. In the project communities, these water collectors collected 3.6-10 liters more water on average from all sources—safe and unsafe—with the largest increase experienced by female youth. Time savings was largely driven by a statistically significant reduction of 41 minutes in waiting time at the water source. Of the water collectors living in treatment areas who reported time savings from collecting water, 11.7 percent reported they allocated time savings to domestic chores, 10.4 percent to rest, 9.8 percent to spend time with family, and 7.1 percent to work in the field. In addition, 17.5 percent fewer households reported water collection negatively affected child’s school attendance. While the time savings used for rest and leisure activities is not typically associated with economic value, the fact that community members choose to use the time savings in this way demonstrates that they value this time.

Improper handling and/or storage of water at the household likely reintroduced contamination. Almost half of the samples taken from water stored at the households, but collected from handpumps, tested as high risk contamination levels that were unsafe for consumption. In addition, the community-based trainings had no impacts on sanitation practices and handwashing. Given these behaviors, waterborne illnesses did not decrease as predicted in the theory of change.

There was no evidence that the project increased household incomes, though there was an overall trend of economic growth in the region. Water committees were still functioning at a high level. Revenues generated from water sales appeared to support the regular operation and maintenance of the hand pumps. In addition, only 6 percent of water committees believed their hand pump would be functioning in 10 years. Key sustainability issues identified by the water committees were a lack of sufficient revenues, access to spare parts, and technical capacity for larger repairs.

The final impact evaluation uses a difference-in-differences methodology to estimate impacts of the Rural Water Supply Activity. Treatment areas were selected through a community-driven approach at the district level in Nampula and Cabo Delgado. Comparison communities were randomly selected from the same four districts (Mogincual, Murrupula, Mogovolas, and Moma) as the sampled treatment communities.

The project was implemented in three phases across Nampula and Cabo Delgado provinces. The evaluation focused on the Nampula province where 100 boreholes were installed in Phase 1, 150 in Phase 2, and 108 in Phase 3. Given timing of implementation and evaluation surveys, the impact evaluation sample focused on the Phase 2 communities, sampling 15 treatment and 23 comparison communities with an exposure period of 17-24 months. Evaluation questions related to sustainability focused on Phase 1 and Phase 2 communities with an exposure period of 17-31 months.

The impact evaluation relied on panel data set consisting of a 2011 baseline survey and a 2013 follow-up survey. The specific surveys and sample sizes were: