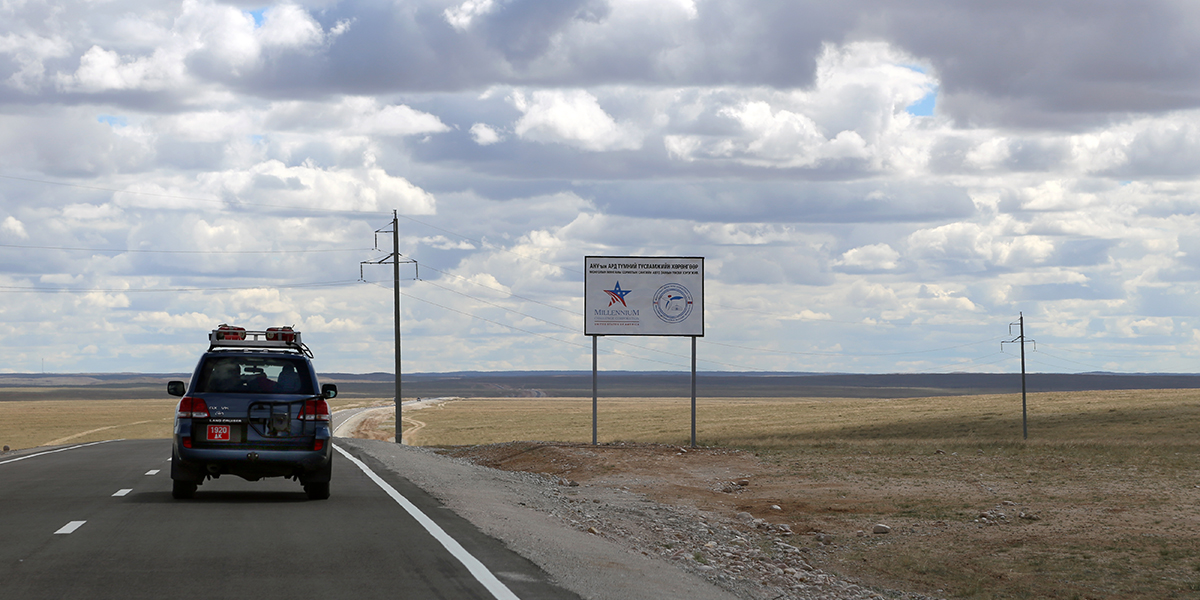 MCC’s $269 million Mongolia Compact (2008–2013) funded the $75 million North-South (N-S) Road Project to reduce transportation costs along a critical corridor between Russia and China by constructing a 176.4 km all-weather road section from Choir to Sainshand and by providing the Government of Mongolia with technical assistance and equipment for road maintenance. The project theorized that these outputs would decrease road roughness, travel times, and vehicle operating costs and increase traffic.

This performance evaluation was designed to answer the following questions:

The construction of the 176.4 km Choir-Sainshand road section reduced travel times between Ulaanbaatar (Mongolia’s capital city) and Sainshand (the end of the MCC project road section) from 30.9 hours before the compact to 9.5 hours in 2019. Road roughness declined from 11.2 meters/km before to 2.23 in 2019. The road is currently in good condition but shows slightly varying levels of transverse cracks.

Average annual daily traffic increased from 128 vehicles in 2009 to 1,544 in 2019. Close to 70 percent of N-S Road user vehicles in 2019 were sedans or SUVs/vans. Articulated trucks with more than five axles made up another significant percentage (13.2 percent). Modes of transportation also shifted significantly from trains to sedans, taxis, and buses since project completion. Nearly a third of drivers interviewed in 2019 were involved in the transportation sector. Passenger transport users were working mainly in the mining and trade sectors, followed by transportation. Since the road improvement, travel for personal reasons such as leisure, visiting family, and tourism became more frequent, especially among passenger transport users. But close to half of drivers and a third of users travel on the road for work-related trips.

A wide variety of goods are transported on the N-S Road; metals (17 percent), plastic and rubber products (13 percent), and perishable goods (24 percent) are among the most common categories. Only 61 percent of surveyed vehicles that were transporting goods reported being loaded—vehicles driving northbound toward Ulaanbaatar were more likely to be loaded than southbound vehicles. The overall volume of goods transported on the N-S Road has grown significantly since the road improvement, according to people who work at establishments along the road and observe its traffic.

Although costs for goods transportation vary greatly, there seemed to be a consensus that costs dropped after the road improvement. For instance, articulated trucks with more than four axles used to charge $0.21/ton-km (in 2019 USD) before the road improvement but charged only $0.06/ton-km in 2019. When using the N-S Road, drivers travel mainly between Ulaanbaatar-Sainshand and Ulaanbaatar-Zamyn Uud, and passenger transport users travel mainly between Ulaanbaatar-Erenhot and Ulaanbaatar-Sainshand.

Trucking companies operate under a free market regime in Mongolia, with at least 200 freight forwarder companies operating in Ulaanbaatar alone. Although transport companies are members of associations, pricing is not discussed within these collaborations. The National Center for Road Transport issues indicative maximum freight rates in MNT/ton-km; however, these rates are only indicative—actual rates vary according to market conditions and are often lower than the published rates.

Bus services are highly regulated by the National Center for Road Transport, who determines fares, routes, and operation times, as well as carries out demand analysis on routes before awarding contracts. All bus services along the N-S corridor started after 2015, and the fares rose once in 2018. There is some competition among bus operators, but most of the competition takes place between buses and other forms of transport, especially intercity taxis and microbus services. Intercity taxis are not regulated and the volume of their activity is difficult to estimate given their informal nature. Bus profitability is highly sensitive to vehicle occupancy rates. Bus operators’ profit margin suggests that profitability is low for operating on the N-S Road, benefiting consumers on the N-S Road.

The Ministry of Roads and Transport Development conducts visual inspections of international and state roads with the Road Transport Development Center regional engineer and the technical director of the road maintenance company to determine maintenance requirements for the upcoming year. Mongolia has an established road fund, but it acts as a budget line in the general state budget and its use is not restricted to maintenance works—it can also be allocated toward new road construction. Although maintenance budgets have generally remained low, a new law passed in August 2019 is expected to increase the budget for road maintenance.

Routine maintenance of the N-S Road has been underfunded since the road’s construction. After the works on the N-S Road were completed in 2013, the budget allocated in 2014 for routine maintenance was less than 10 percent of the requested amount ($711,000 in 2019 USD), but gradually the allocated amounts have increased. The N-S Road section MCC improved is expected to maintain its structural life until 2028. If an asphalt overlay is not performed before 2028, the road will require rehabilitation treatment. Since other road sections of the N-S corridor improved earlier have yet to receive periodic maintenance, it is unlikely that the N-S Road will receive periodic maintenance before 2028. Although some maintenance equipment was transferred from MCC to the Government of Mongolia as part of the N-S Road Project, the equipment had little usage and its contribution to improving maintenance practices was limited. Conditions Precedent were put in place to improve the sustainability of the road investment but had limited effect on Mongolia’s road maintenance financing.