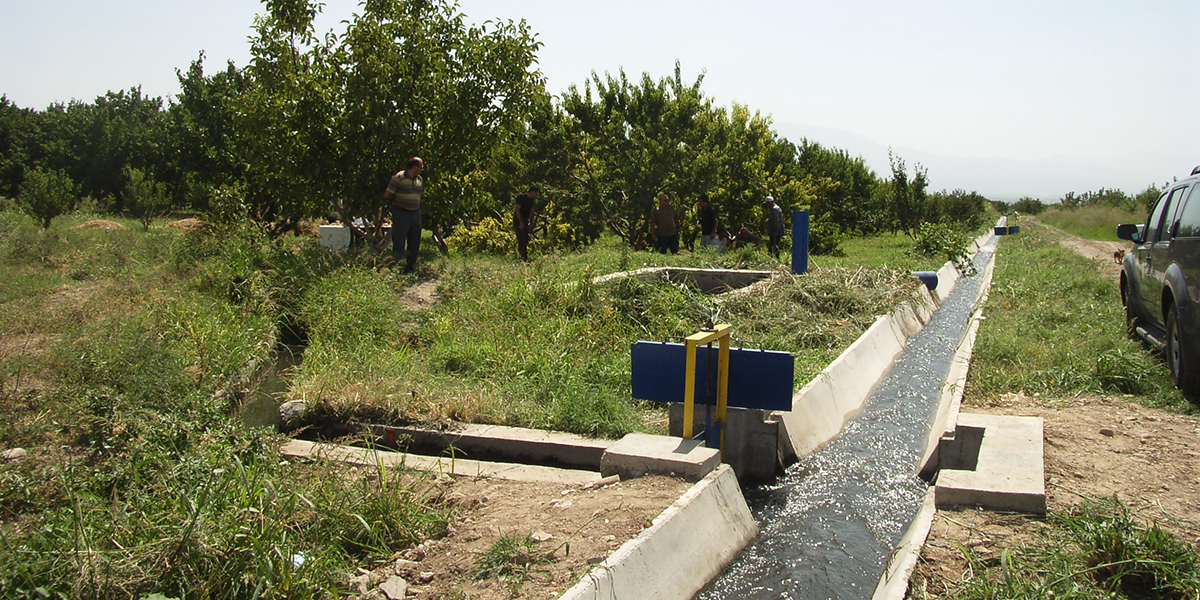 Improving the Agricultural Sector in Armenia Through Irrigation

MCC’s $177.7 million Armenia Compact (2006–2011) funded the $153.7 million Irrigated Agriculture Project, which included the $121.5 million Irrigation Infrastructure Activity to improve the quantity and reliability of irrigation water. The activity was designed on the theory that improved irrigation infrastructure coupled with the Water-to-Market Activity (training in agricultural practices, increased access to credit, improved capacity of the water user associations, and improved marketing opportunities) would prepare and encourage farmers to shift production to higher-value agriculture, thereby increasing profits and income.

MCC commissioned Mathematica to conduct an independent final impact and performance evaluation of the Irrigation Infrastructure Activity and components of the Water-to-Market Activity. Full report results and learning: https://data.mcc.gov/evaluations/index.php/catalog/116.

Quantity and Reliability of Irrigation Water

Use of New Practices and Agricultural Productivity

This final impact and performance evaluation was designed to answer the following questions.

These findings build upon the Water-to-Market evaluation report final results published in 2013.

Quantity and Reliability of Irrigation Water

Use of New Practices and Agricultural Productivity

Relative to the comparison group, rehabilitating irrigation infrastructure did not increase the amount of land that was irrigated. For some types of land, there were modest impacts on duration and irrigation intensity. Arable land and kitchen plots received 4.6 and 2.6 more hours, respectively, of irrigation per week from improved tertiary canals relative to the comparison group, but there was no detectable increase in yields.

In 2010, there was no evidence of an increase in the adoption of on-farm water management and high-value agriculture practices in communities that received Water-to-Market training in 2008. Possible reasons for lower-than-expected impacts could be that farmers had behavioral inertia, farmers lacked funds to invest in new crops or technologies, farmers viewed investments as too risky, and/or system functionality was not as good as expected.

On average, farmers earn more than twice as much from nonagricultural work compared with net agricultural profits. Farmers did not adopt new practices or change crops as expected. Changing crops or investing in new technologies is a bigger behavioral change because it entails deciding to place greater emphasis on farming as a main activity.

The analysis of the time trends suggests that water user associations are unlikely to become financially self-sufficient in the near future without additional intervention. Revenues and expenditures have shown modest improvements since 2007, but the service fee collection rates and cost recovery rates appear to have plateaued after 2009.

Although the evaluator did not recalculate the ERR, they provided feedback on the validity of the Irrigation Infrastructure Activity ERR produced by MCC in 2008 in light of the evaluation findings.

MCC’s 2008 ERR of 24 percent projected immediate impacts of the irrigation rehabilitation on households’ agricultural income due to greater access to and reliability of irrigation water, but this was not detected by the evaluation. In addition, there was no significant evidence of changing water use behavior, adoption of new agricultural practices, or planting of new crops. This suggests that the actual ERR was not as large as the 2008 prediction.