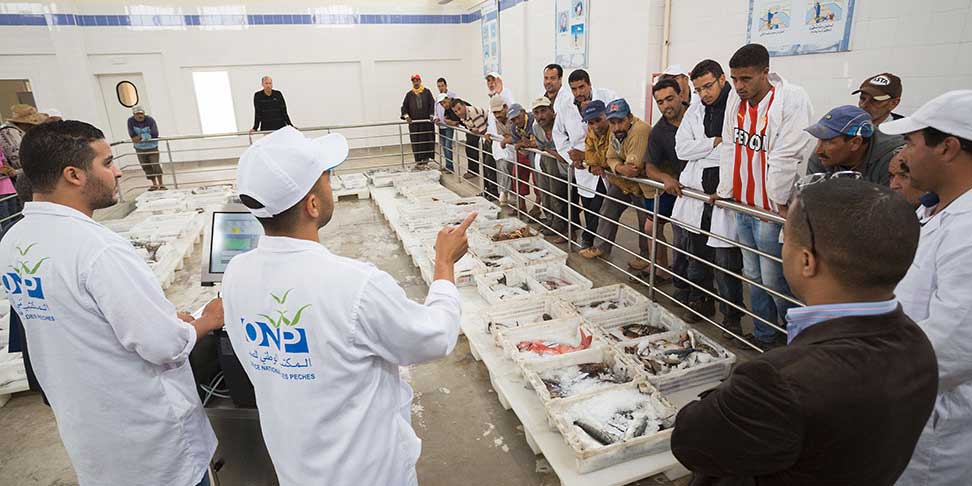 MCC’s $650.1 million Morocco I Compact (2008-2013) funded the $111.3 million Small-Scale Fisheries Project. The project aimed to increase incomes, improving the small-scale fisheries value chain, such as using cold storage, and increasing access to markets. This was to be achieved by building landing sites and wholesale markets, upgrading port facilities, establishing three marine protected areas, subsidizing transportation upgrades for fish vendors, and providing literacy and vocational training for fishers and fish vendors. In addition, the project aimed to support women working in the sector by constructing and equipping facilities to store and prepare algae and fish for consumption.

Knowledge of Techniques and Environmental Management

Quality of Fish, Prices, and Costs

The performance evaluation was designed to assess whether construction of landing sites, wholesale markets, and facilities; literacy and vocational training; and subsidized support for transportation equipment led to the desired outcomes. Did they:

Although not strictly attributable to the program, the trend analysis produced by the evaluation suggests the program was among many factors that contributed to improvements in prices and costs during the evaluation period.

The number of landings, port facilities, and wholesale markets to be improved was reduced from 39 to 26 when assessments of proposed sites identified land ownership challenges, lack of suitability, and earlier underestimating of costs. The need for cold storage, at site of catch, landing sites, and for vendors, was targeted as a critical link in value chain. The project increased the equipment subsidy to mobile fish vendors from 30 percent to 90 percent by leveraging resources from other government programs, while reducing the number of mobile fish vendors who could be supported. As of 2013, despite the lack of formalization, fishers reported improvements in marine protected areas – such as the return of octopus in Mougador. While the two pilot projects focused on women resulted in new facilities, results were limited due to reported reluctance of husbands for the women to participate, arduous labor, dependence on middle men, and general constraints in their socioeconomic environment.

Knowledge of Techniques and Environmental Management

Fishers who participated in training reported a greater understanding of safety techniques, such as the importance of maintaining equipment to reduce failures and using life jackets and GPS on boats. Additionally, fishers reported increased use of ice to protect the quality of fish during transport, a practice that they had not considered cost-effective before they were taught about the effect of cold storage on the quality and value of their fish. Fishers also reported they became sensitive to environmental management, specifically respecting marine protected areas, fishing quotas, and returning juvenile catches.

Quality of Fish, Prices, and Costs

Small-scale fishers targeted by the project began receiving training and support in October 2011 and the Tifnit and Tan-Tan sites were completed in October 2012. However, some activities, such as the marine protected areas and fish wholesale markets, were not fully operational by compact end, resulting in an exposure period that varied across activities between 0-24 months.

This interim performance evaluation of the Small-Scale Fisheries Project used a primarily pre-post methodology relying on data from:

MCC procured Mathematica Policy Research to conduct a final evaluation of the Small-Scale Fisheries Project. This continued evaluation provides an opportunity to explore the projects’ sustainability and to measure productivity and ecosystem impacts which may have occurred after the compact’s end date in 2013. Final report expected in 2022. Supporting materials available here: https://data.mcc.gov/evaluations/index.php/catalog/264.